As many of you probably know I'm a big fan of the birds of prey! In the last few days I have been treated to some amazing encounters with some of our southern Aussie raptors!
Peregrine Falcons
I was lucky enough to spot a Peregrine sitting up on a power-pole whilst on my way home from work the other day... As this pole was quite close to the Tanunda Sewage Ponds most likely it had been hunting the some many ducks which frequent this spot! Luckily the pole was next to a road so I could slowly drive in closer to try for a shot! As I got closer I noticed another Falcon sitting about 25m out into the adjacent paddock... this was the female sitting on a Pink-eared Duck kill! She immediately flew up and joined her mate on the power-pole, which gave me the opportunity for this shot below showing the big difference in size between the male on the left and the female on the right! 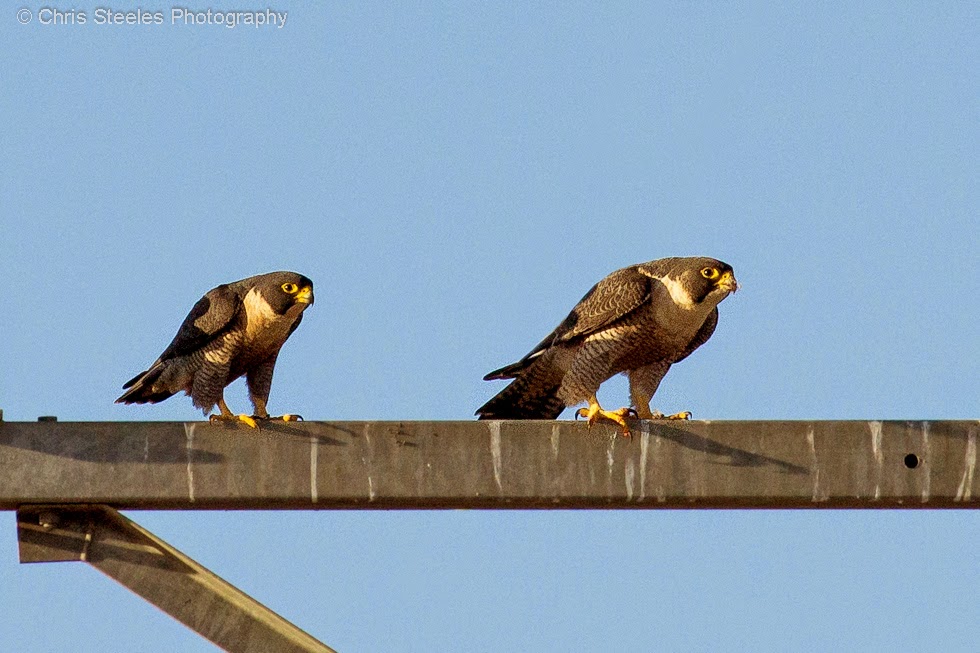 After a short period of watching me sitting in the car the female decided I posed no threat and flew back down to the kill...﻿ 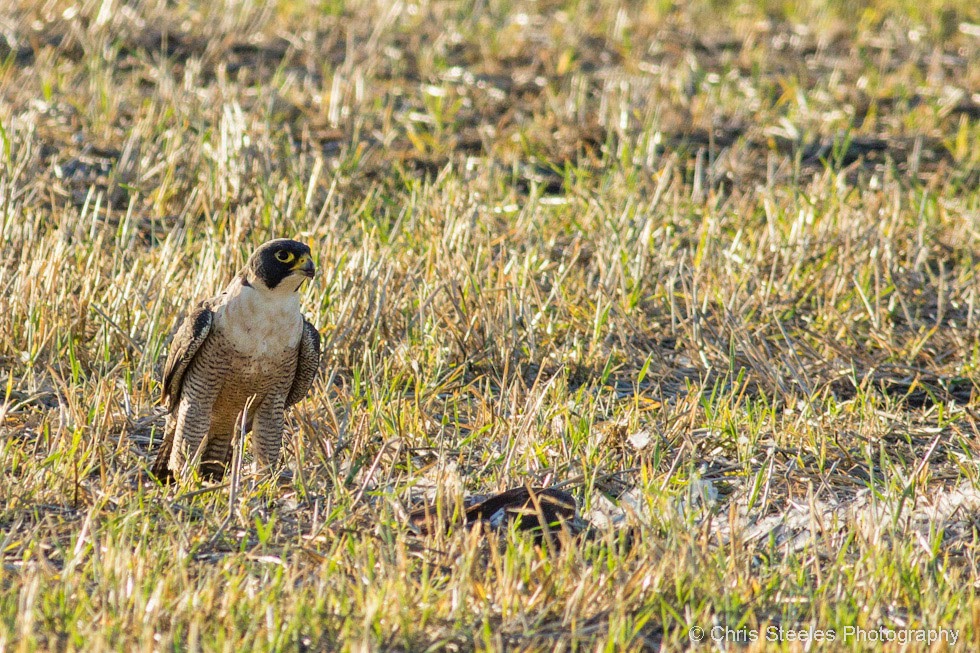 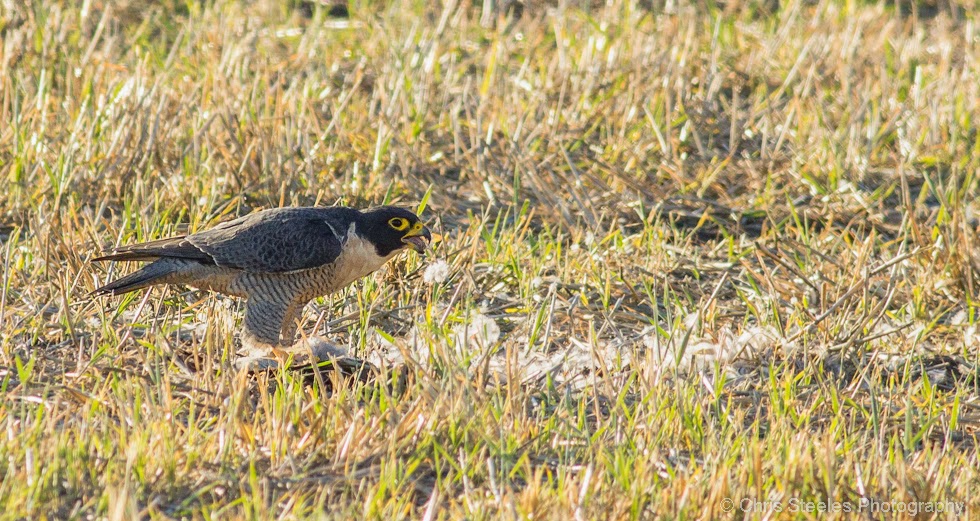 Meanwhile the male watched on! So lucky to encounter this scenario in beautiful late light too :-)﻿ 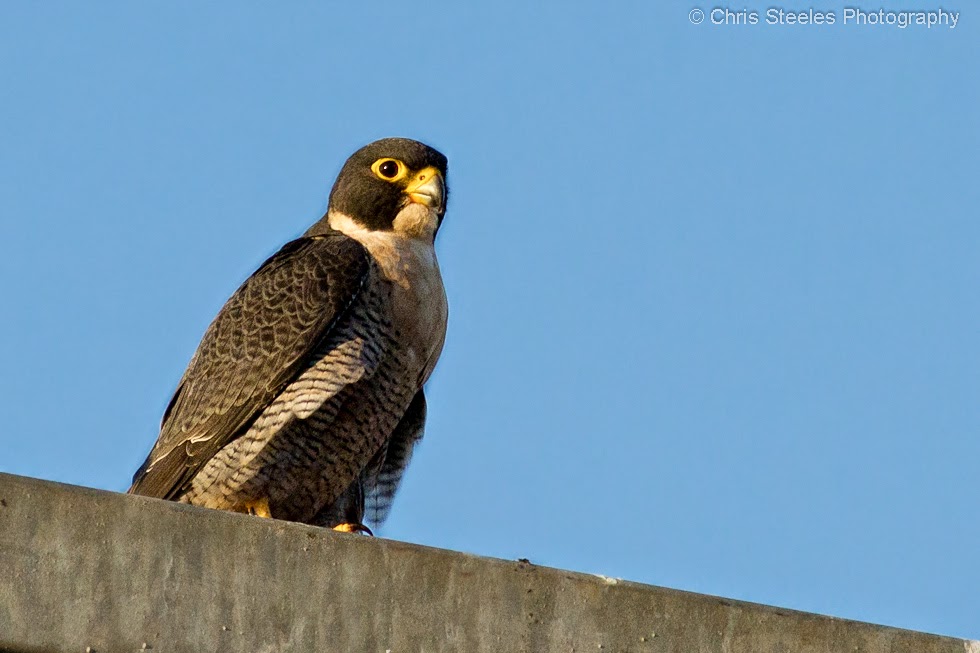 After she had had her fill she flew off up the fence-line and landed on the fence to digest her meal and watch the day slowly fade!
The male thought this was the chance to get a feed so then flew down for his turn for duck dinner and I tried for some images of him... he was a lot more flighty and I couldn't get close enough for a decent shot... so I turned to look at the female and saw this fantastic scene in front of me! The light was gorgeous and the silhouette it created gave a super photo opportunity! ﻿ Australian Hobby
On the same trip home as I encountered the Peregrines above I also came across my local pair of Hobby's sitting out the front of my house! The light was almost spent but I managed a couple of images of the female...﻿ 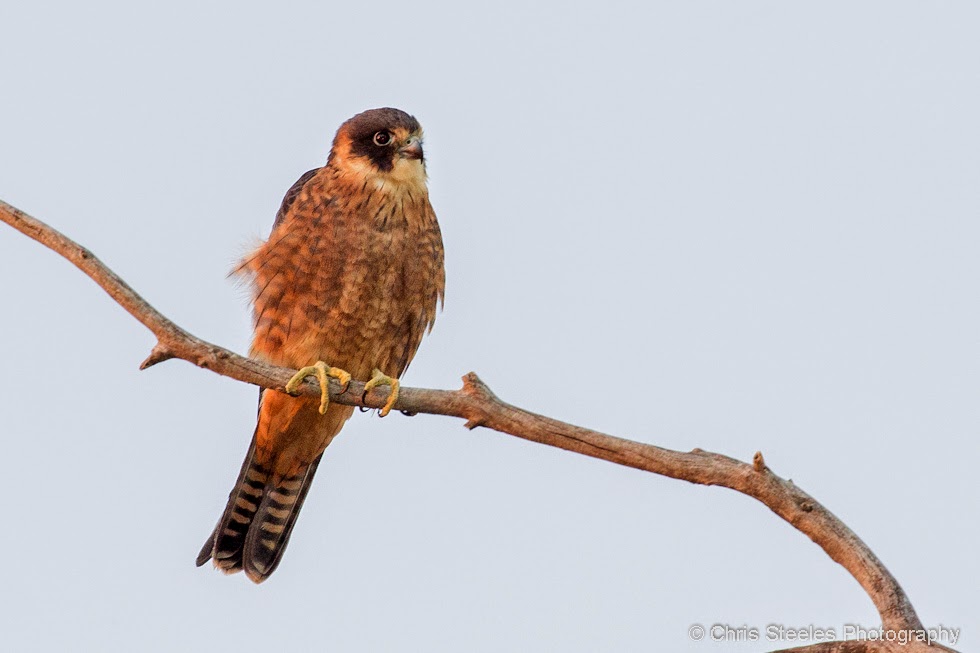 Black-shouldered Kite
Another encounter I had over these four days was this one with a pair of Black-shouldered Kites! I was driving to a friends place when I saw one sitting typically on the top of a dead branch of a Sugar Gum near Wasleys here in SA, as it wasn't too high I thought it a good photo op! When I got out and grabbed a few shots another unseen bird took off... closely followed by the original bird! Both flew high and I thought the chance of a decent shot was done! But then one of them came back down at good speed for a Kite and landed again on the branch! The other bird then started coming back down displaying on the way down in typical Elanus Kite fashion fluttering it's wings in the process. When it landed as well they both took off and played a game of chasey right in front of me! Gotta be lucky sometimes :-)
Here's the second bird coming down during it's display!
﻿ 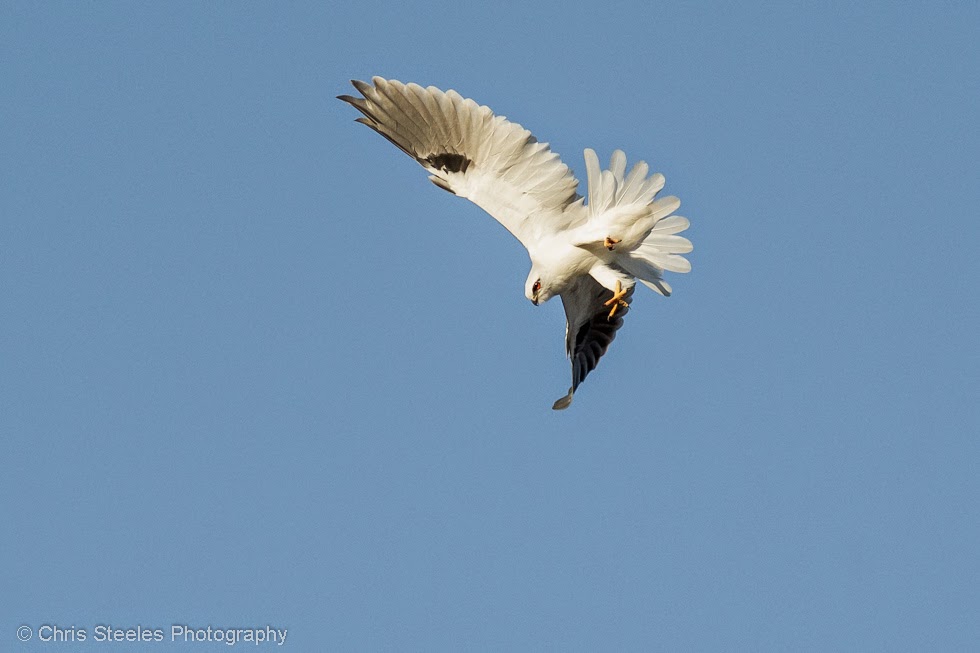 and the aerial chase is on!﻿ 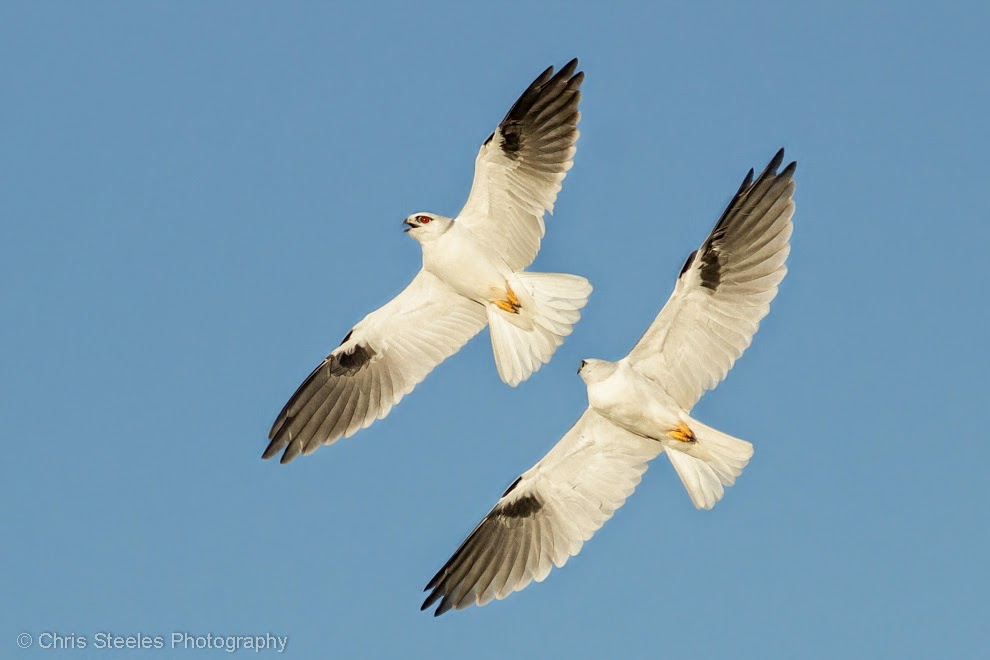 Brown Falcon
Last but not least was this Brown Falcon which was hawking flying ants the other day! At this time of year in the right conditions we often get flying ant hatches here! and the birdlife certainly know how to fill their bellies up with them! There were Magpies, Ravens, Starlings and Wattlebirds all enjoying the easy feast! But for me the highlight was photographing this cool Brown Falcon catching the tiny insects! It was cartwheeling around all over the place and was a lot of fun to watch :-)﻿ 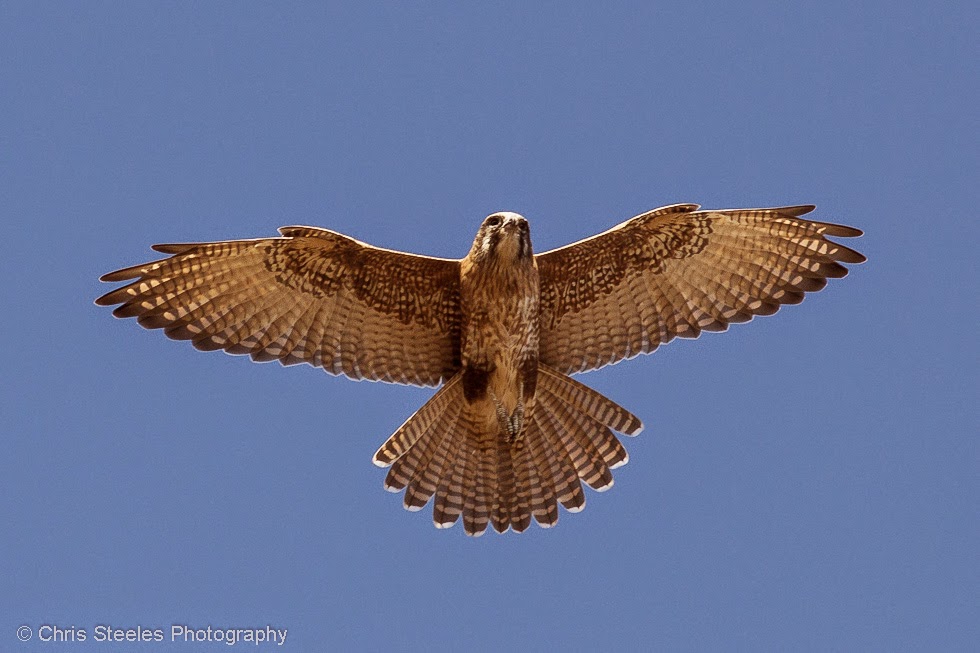 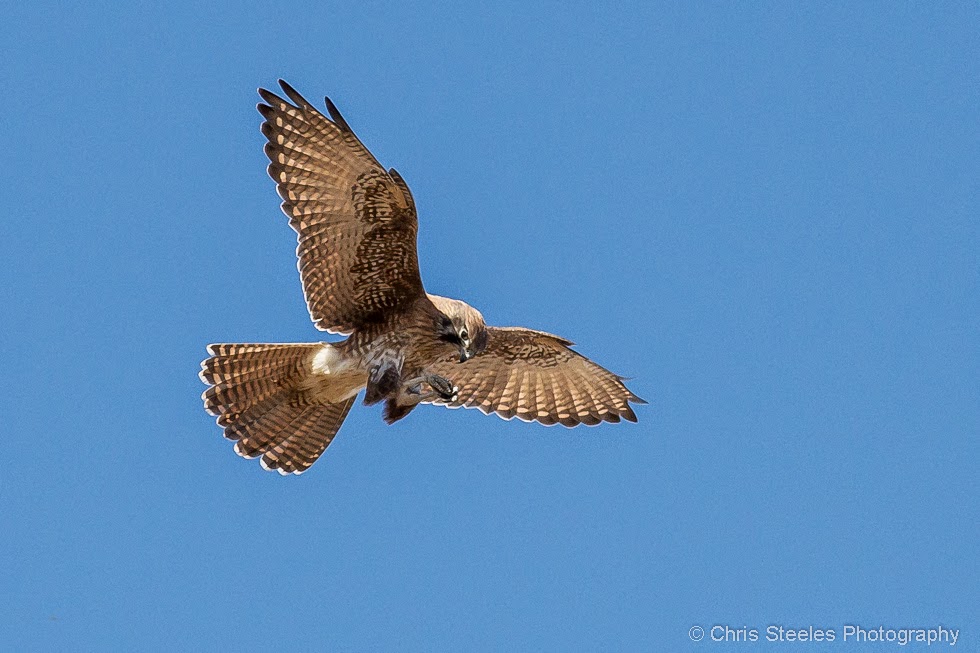 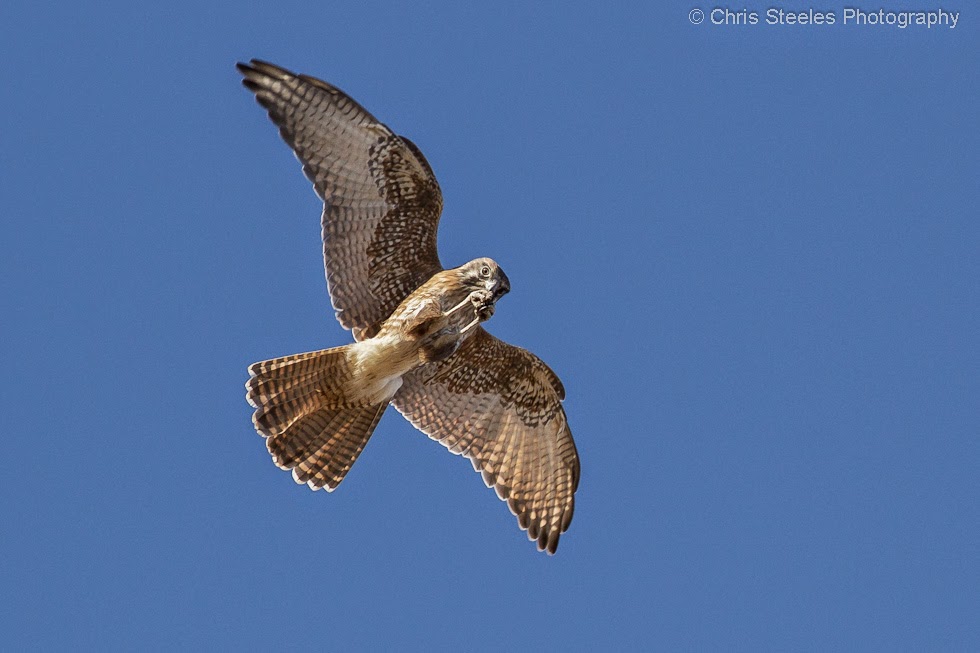 With the nice light now falling for longer during the day now the sun is heading north... Here's hoping for plenty more cool ops with our wonderful birds of prey!
Cheers
Chris﻿
Posted by Chris Steeles at 5:51 PM