﻿A lifelong birding dream of mine was to find and photograph a Scarlet Chested Parrot in the wild. Common in aviaries but rare and usually inaccessible in the wild due to their liking of arid outback habitats it's been a pipe dream for a long time! I had pretty much resigned myself to the fact I probably wouldn't see them till I could find the time and funds to get over to Ceduna on the west coast of South Australia to find them!﻿ The only other reliable? place to find them is in the large Mallee Block (Bookmark Biosphere) just north of the riverland in SA. The accessible area in this block Gluepot Reserve is an old station bought out by Birds Australia to look after the Mallee dependent species which have lost most of there habitat though land clearing for farming. Having said that it's no sure bet you will find SCP's here as they only visit the reserve here and there with no major regularity!
I decided a little while ago (about 2yrs back I think!) that the next time a report came through mentioning a sighting of a Scarlet, I would be on the road looking for it as soon as possible! So when that report came through arrangements were made and I was on the road, after meeting good friend Kay Parkin in Waikerie we were off to Gluepot! Meeting us up there were two other birding enthusiasts Steve and Mike Potter.
These photos are the results of the trip and needless to say I was rapt!! 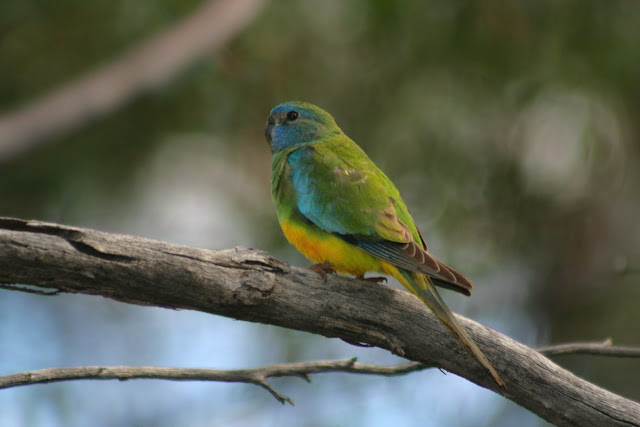 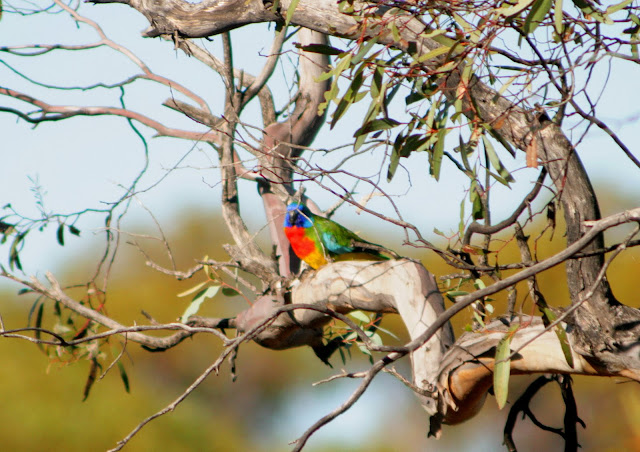 Also reported was a Painted Honeyeater had been sighted in the last few days. A rare (in SA) vagrant it was an opportunity to good to pass up! We searched the area it had been reported for around an hour without any luck and so resigned ourselves to the fact we probably wouldn't find it and went back to the area the Scarlets were in. After another hour of showers and minimal birds we decided to pull the plug and head home. As always good birding can be had on the drive out so anytime we came across a interesting call or sighting we would stop and see what was around that particular area. The four of us were travelling in a convoy of two cars and we had passed the other guys as they searched for something they had seen. A little further down the track we passed where we had searched for the Painted Honeyeater. Around 2-3km later a Chestnut Quail-Thrush was on the road so we pulled up to try to get a photo. Steve and Mike then caught up and pulled over also. Around five minutes had passed and Steve and I were persisting with the elusive Quail-Thrush while Kay and Mike were leaning on the car talking and waiting, when next minute we here Mike casually say and I quote "anyone interested in a Painted Honeyeater...." WHAT THE!!! needless to say Steve and I were there in no time! and there it was a single Painted Honeyeater in a lone Mallee right above the Potters car!! High fives all around! we couldn't believe our luck!! Scarlets and now a Painted HE, in the one day! two of the hardest to find birds in South Australia! Unreal!
﻿

﻿
An amazing day in an amazing place! If you are ever in SA and looking for a great birding spot head to Gluepot Reserve you cant go wrong!!

A while back I compiled the top ten Aussie birds I want to see before I die! with this trip I managed to tick another one off!
Before you say it yes I like my Raptors and Parrots!!! and it's a little weighted to birds that are found a fair way from where I live! anyway that's my personal list and I reckon at least 9 are achievable before I'm pushing up daisies!! The Night Parrot is more a dream than anything else but you never know!

For another report from the same trip check out Kay Parkins Blog at: http://kayparkinbirding.blogspot.com/2011/08/scarlet-chested-parrots-painted.html