The Striated Grasswren is one of my favourite birds! They live in a harsh hot environment... they can be hard to find and then can be even harder to see well! They are one of the top birds to find in the Mallee/Spinifex regions of South Australia!
Since I started photographing them about 5 years ago I have had some good sessions and many.. many.. frustrating sessions with them! Back about 4yrs ago we had a few good seasons in a row out in the Mallee and they could be found fairly easily! Although still difficult to photograph with their great ability to zip between Spinifex clumps at super speed! Back then I was using my old camera set up and I gained a few shots but in reality nothing all that flash!
Jump forward a couple of years and I had upgraded to a better gear and sharpened my camera skills... so with it came a desire to get some decent shots of these little rufous beauties! So for about 18mths every time I went to the Mallee of Gluepot Reserve here in the Riverland of SA I searched for this species! Unfortunately by this time the Mallee had gone back to being dry... so with it the birdlife dropped off to an extent! I went for a long time without even seeing a Grasswren... and as such found it a little frustrating!
Then in Spring last year a pair of even harder to find Scarlet-chested Parrots nested in an easily accessible section of Gluepot. This was an opportunity not to be missed so I was back up there again photographing them. Once I had my fill of the parrots I decided to try and find my nemesis of late and head off into a decent patch of Spinifex and see if I could be lucky!
Playing a little call to see if there would be a response... for the first five minutes I heard nothing! Then faintly off in the distance the familiar squeaking call of a Grasswren! Finally I had found a pair! Unfortunately I couldn't manage any decent shots and walked away happy to have found them but with unfinished business!
About a month later I went back to the parrots and so tried the Grasswren spot again... this time nothing! Which made me wonder if they were a pair just passing through...
I never got back again till the new year when I met up with some young birders who had ventured over from the eastern states to see some of our Mallee birds! I was initially a little sceptical as I took them to this spot in the middle of a 40+ degree heatwave but it turned out to be a blessing as their was no one else around! Rolling up at daybreak to beat the heat we headed to the spot I had seen the birds back in Oct 14. Again I played a little burst of call and then after a few minutes we got a response! This time both birds came right in and gave us all superb views! Not sure how many images I snapped.... but it was a lot! Finally I had the images of these cool birds I was after! Happy days!
So it's good to know there's at least one pair of Grasswrens still in-habiting the Spinifew of Gluepot! Although I'm sure there must be more out there! On the way in we saw a little bird run across the track in front of us about 100m up in front whilst checking out a Chestnut Quail-thrush! I'm 95% sure it was a SG! Might have to check that spot next time!
Here's some of the images from that day! 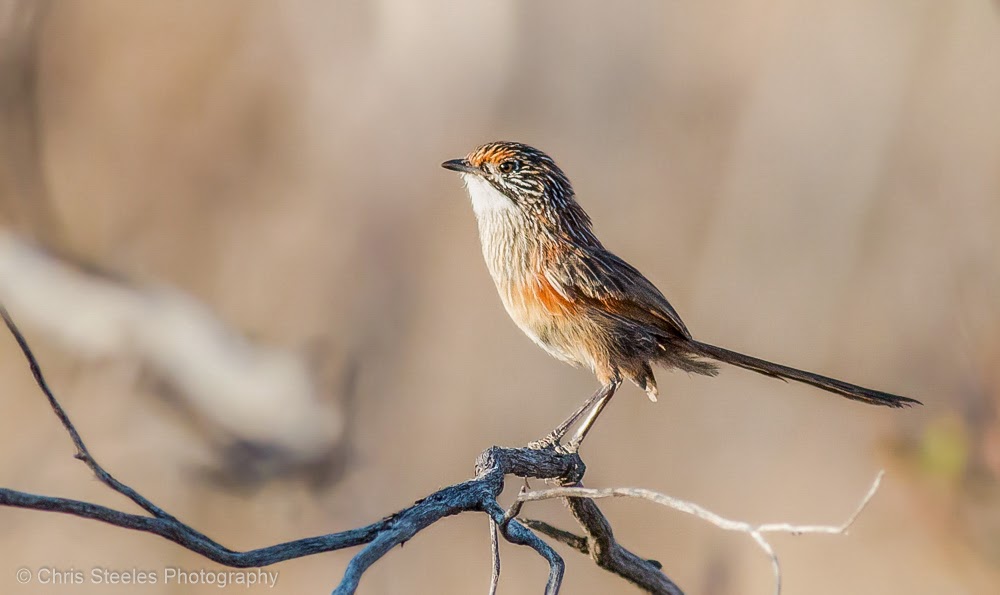 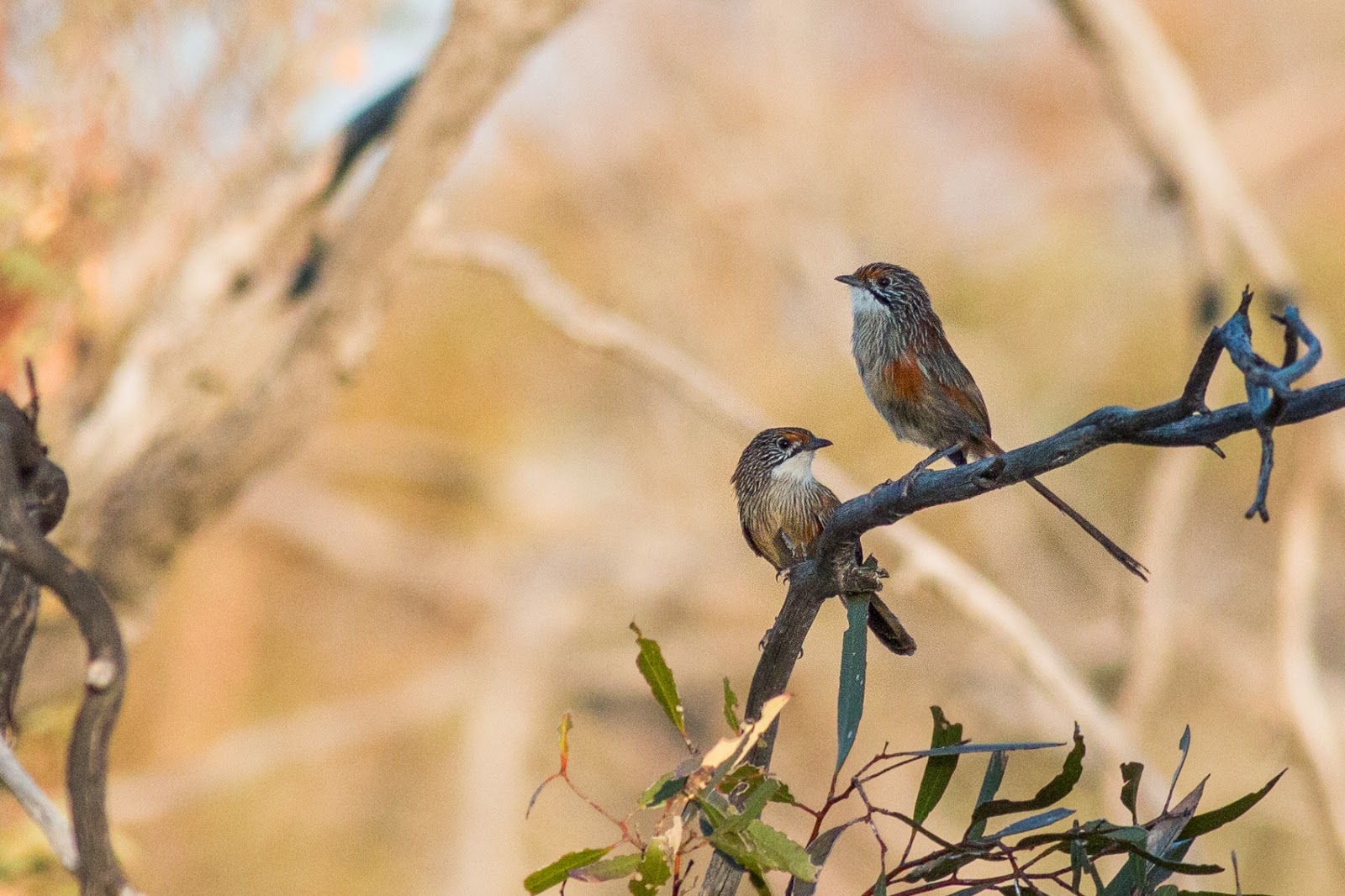 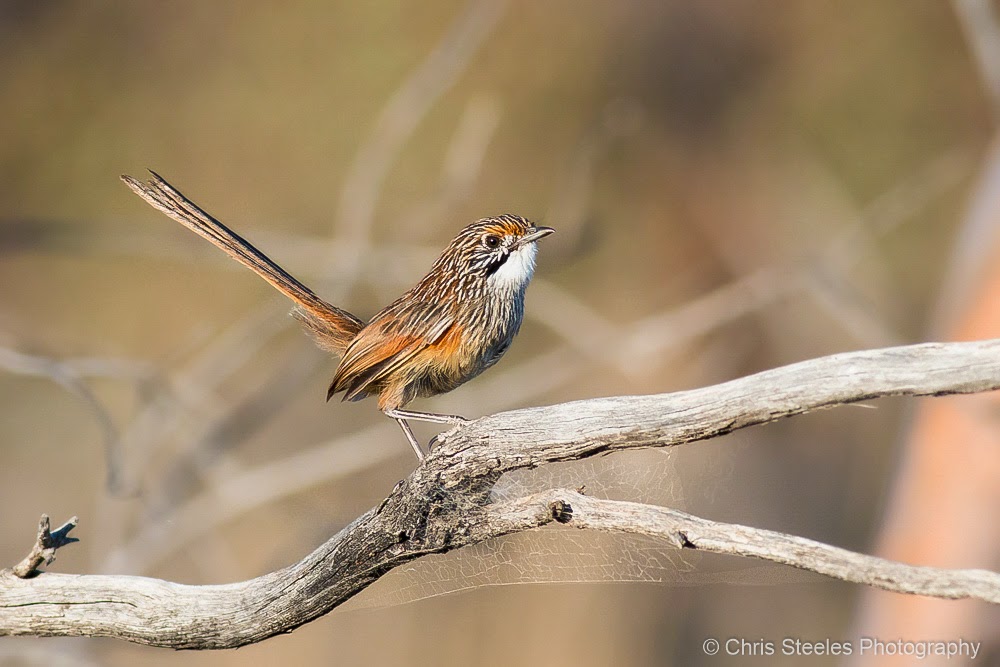 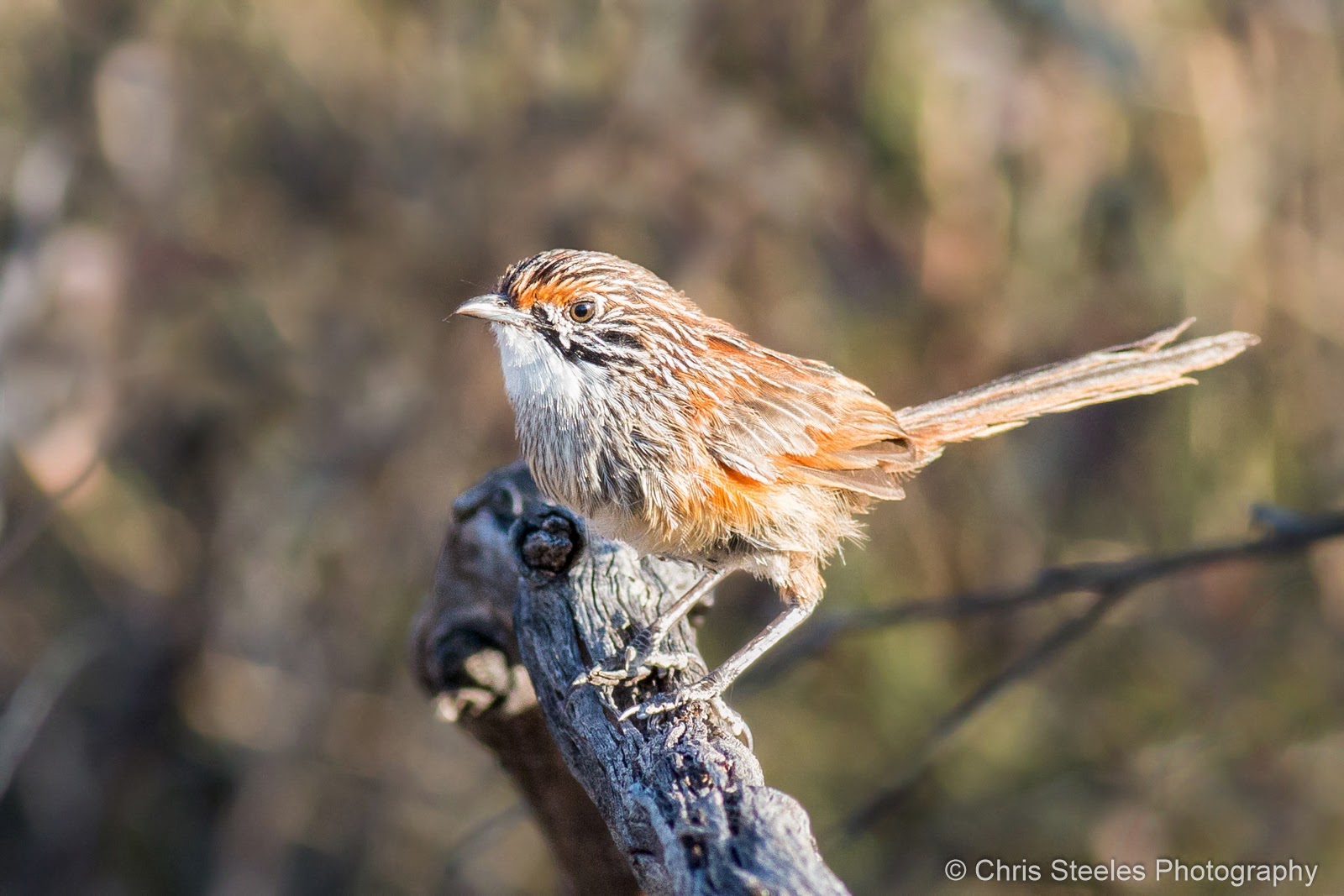 Mallee Emu-wren
The Mallee Emu-wren is another small wren of the Mallee/Spinifex country and another I have been real keen to see! They live in a few spots in SA although they have been decimated by bushfires knocking out their prime habitats of late! Which has put them into the critically endangered category here in SA mainly due to the fragmentation of the population caused by land clearing around and through their habitat! So when a fire wipes out a block of Mallee... there's no birds to spread back into the regrowth! As these guys are tiny and not strong flyers! Quite a sad situation in my eyes!
So three days after getting back from the Grasswren trip...  I had to drive over to Wagga to pick up my son who was staying with his Nan & Pa for a while! As this drive would take me fairly close to the last stronghold of this species... a place called Hattah Kulkyne National Park in Victoria, I thought I may as well head off a night earlier and have a shot at seeing if I could see these little ones!
Driving over I arrived at about 11pm at the park and just slept in the car as it was raining quite a bit! Waking up at first light... the weather was still rubbish! With consistent light drizzle and rain periods it certainly wasn't conducive to good birding and photography! Too bad basically I was there and had to try! My first walk resulted in me back in the car after 10mins as the rain got too heavy and I didn't want my camera getting too wet! Waiting it out for an hour it wasn't getting any better so I wrapped my camera in a towel and put another over my head and went off searching! After walking half hour listening carefully I had found nothing! I was getting wet so I thought bugger it I am going back to the car! I thought I would head back a different way and still didn't see much till I got within 50m of my car where I tried to stalk a pair of Mulga Parrots... I managed to flush them! But not before I heard a tiny little squeak call coming from over the back of where they were! I waited and squeaked back and BINGO there was a lovely little male Mallee Emu-wren hoping up to look at me! Woohoo! I was pretty excited by that and took what shots I could but by now was getting real wet so I left it there and went back to the car!
Heading off I went to another spot at the back of a truck-stop on the way out of the park and found two more! A few more shots in the rain and I was done! Well satisfied with the finding of these little gems! Gotta get back in good light now and try for some better pics! :-)﻿ 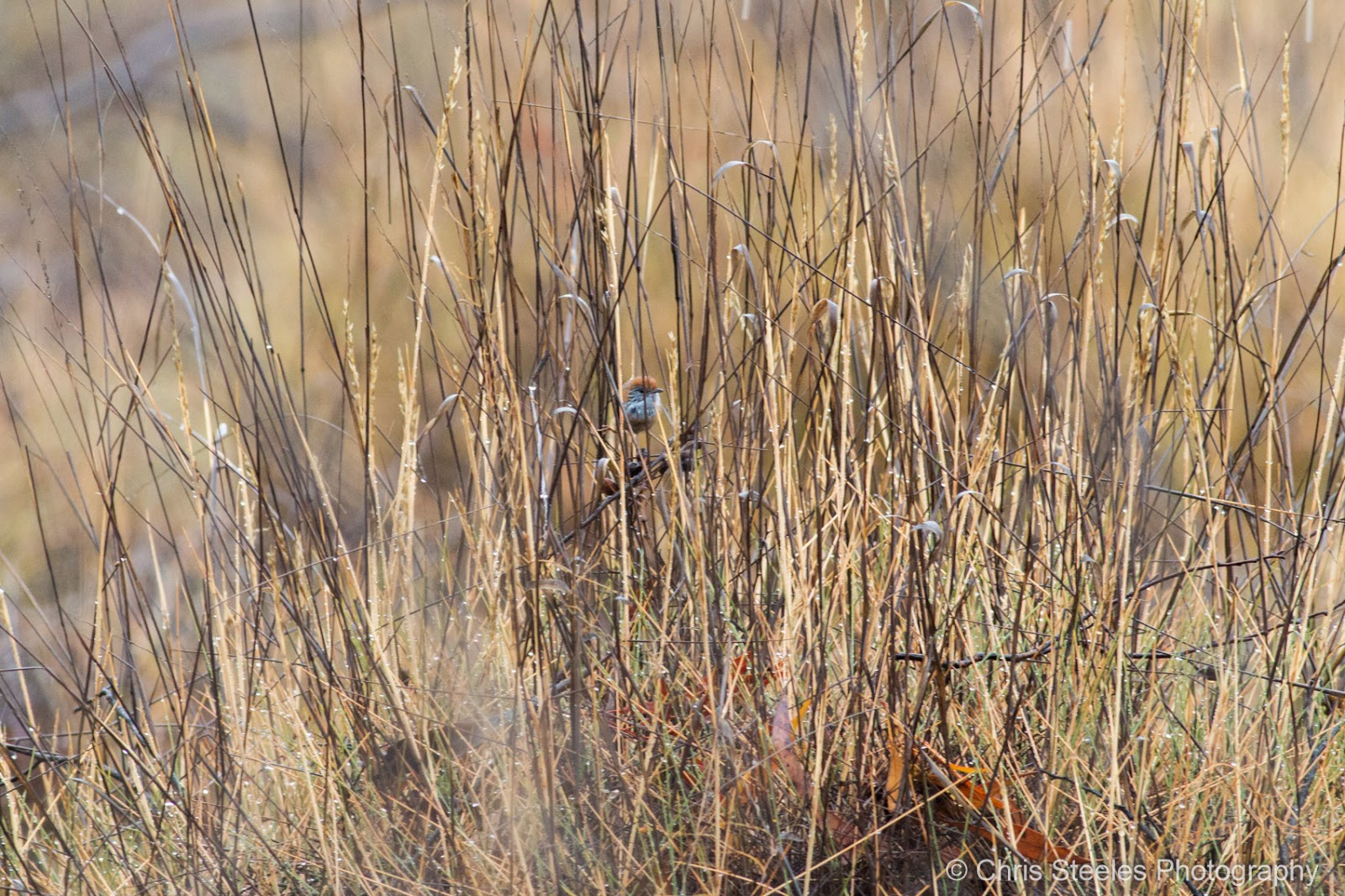 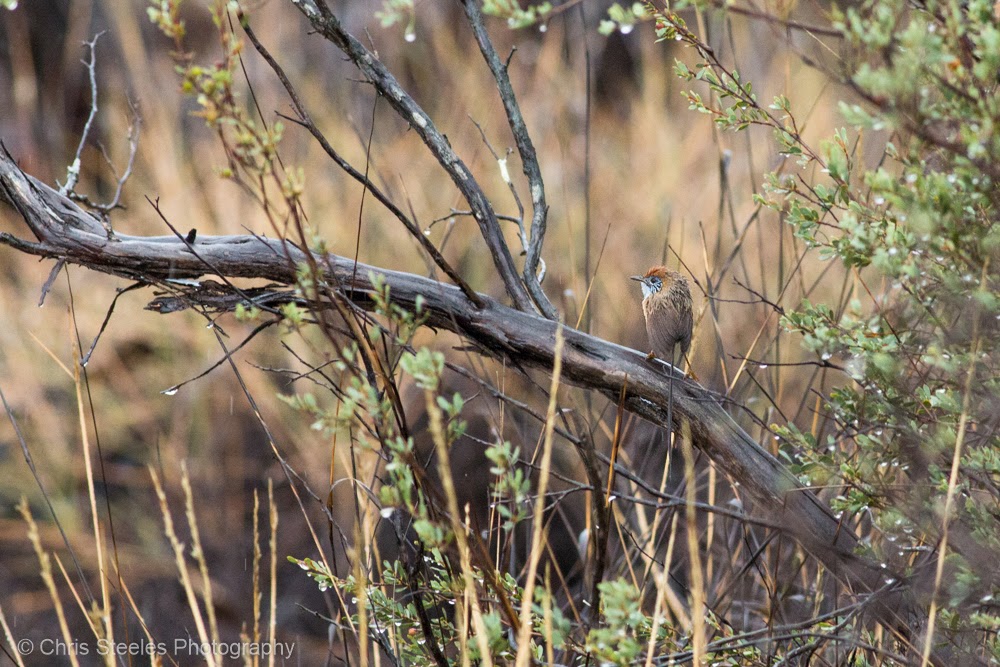 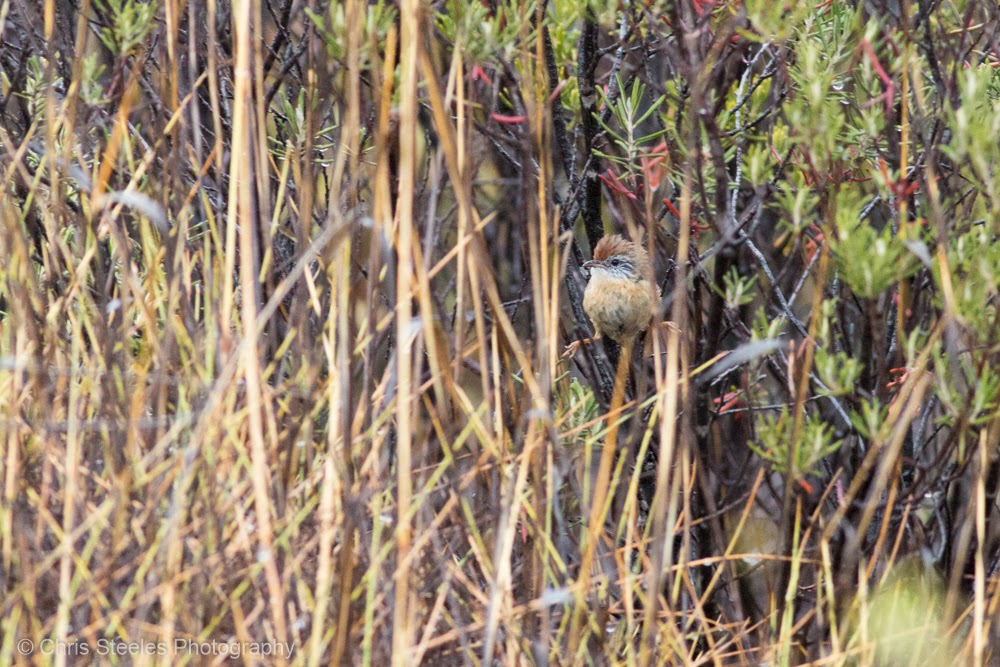 So two cool little Wrens of the Mallee in three days! Certainly can't complain about that!
Thanks for reading.... :-)
Chris﻿
Posted by Chris Steeles at 5:22 AM