As a teenager back in high school I was a dreamer! (still am!) I always sat near windows if possible and spent way too much time staring out of them looking to the skies! Just hoping to see something fly past! Needless to say... I probably didn't put enough effort into my schoolwork as I should have!! One life changing event which did come out of my school years though was to be found in the library! One day in there I came across a book... a book which would become an obsession for me... and in the whole five years I was at that school I don't think anyone else ever got the chance to borrow it as I always had it! The book was "Hawks in Focus" by Jack and Lindsay Cupper! It is a book about their amazing journey photographing all of Australia's 24 diurnal birds of prey at or near the nest! They travelled thousands of kilometres and from memory about eight years to see and photograph all of them. Setting towers and hides at them and then spending time photographing, filming and just observing these amazing birds! To me it was inspirational... I spent many an hour pouring over the wonderful images and reading the text over and over again! I also spent nearly just as much time dreaming of one day being able to do the same thing! To not very long ago that's where it remained... just a dream! Two weekends ago that all changed!!
A little while back I was contacted by a fellow raptor lover... David Gemmel. Sharing a lot of the same interests David and I have become good friends! He makes some wonderful videos of our raptors and has done a bit of work with towers and hides! What also came along with David was his extensive network of fellow raptor lovers! He has a lot of contacts in the world of Australian raptors and Lindsay Cupper was one of them! Through this I ended up meeting Lindsay and some other great raptor loving people when they were on their way up the Strzelecki track about six weeks ago! It was very cool to meet the person who wrote the book of which I was such a big fan!
Anyway a few weeks later I was told of a possible nesting attempt by a pair of Spotted Harriers by a good friend out at Reeves Plains. He said he had seen a Harrier carrying and placing a stick into a low tree on a track next to his property! A few weeks passed before I could get out there but when I did.. straight away a bird was up and circling around over my head! Awesome! I guessed she was on eggs and I left. When I got back I rang Lindsay and he said he was keen to come down and place a hide at the nest when the chicks hatched! A week later I ventured out again and could hear chicks! Must have been on eggs a little earlier than I had originally thought! As they were actually quite big and probably about two-three weeks old!
﻿


I rang Lindsay again and he decided the time was now! About four days later we were erecting a hide at the nest!
With the light angle and the position of the tree we had to get permission from the neighbour to place the hide in his paddock! Happily he was fine with it! Which was very much appreciated as it was the only angle which would work!
Lindsay camped nearby and spent the next two days with them before I could get back. Lindsay kindly said I could spend some time in the hide whenever I had the chance! An offer I couldn't refuse!
It was a beautiful crisp Saturday morning when I entered the hide at 6am! The chicks were still huddled in the nest and not much was happening! I was so amped! I had dreamed of this for years and now I was doing it! The excitement was dimming just a tiny bit when an hour later still nothing other then a lazy wing stretch by one of the chicks.. had happened! Watching out the peep holes in the hide a Kangaroo slowly bounced past and it would be another half hour before something happened!


Then out of the blue the female was on the nest! Not sure how I missed it but in my excitement I instantly burst off a heap of shots and she flew again almost straight away! Cursing myself for not letting her settle... it was ten minutes before I saw her again! This time it was both parents flying in! They did a food pass just out behind the nest and then the female with the prey landed on a nearby fence post and the male in a tree above! Lots of calling ensued which was then followed by a mock mating session on the post! Amazing! The male then flew off... and the female sat there for a short while longer! All this time the chicks were calling... eventually she flew up and landed on the nest and begun to feed what I think was part of a small rabbit to the older two chicks! Super excited but restrained this time I held off shooting any frames till I was sure she was settled and then spent the next half hour photographing, filming and just watching her feed the chicks! Awesome!
﻿


The meal fed the two older chicks and they returned to snoozing! The little guy which was about five days I guess behind the other two went hungry! The female stayed for a while then decided to do a little housework and started collecting sprays of leaves to reline the nest with... she took off about a dozen times to rip off some nearby leaves and then fly back and place them in the bottom of the nest! Then she disappeared again!

It was nearly another hour before the female returned... this time without prey! The little guy was going crazy by this stage and after looking at him for about 30 seconds she flew again. I watched her fly off behind the hide and into the distance... when I could only just still see her I saw another food pass with the male! She returned this time with a blue-tongued Lizard! This time the older two didn't even look at her and the littlest chick got the whole thing!
Just loved watching all this! So interesting to see how they lived their lives! Something without the hide you would never see!
I spent about another half hour with them! The female had retired to a branch behind the nest and the chicks did a little flappercise! 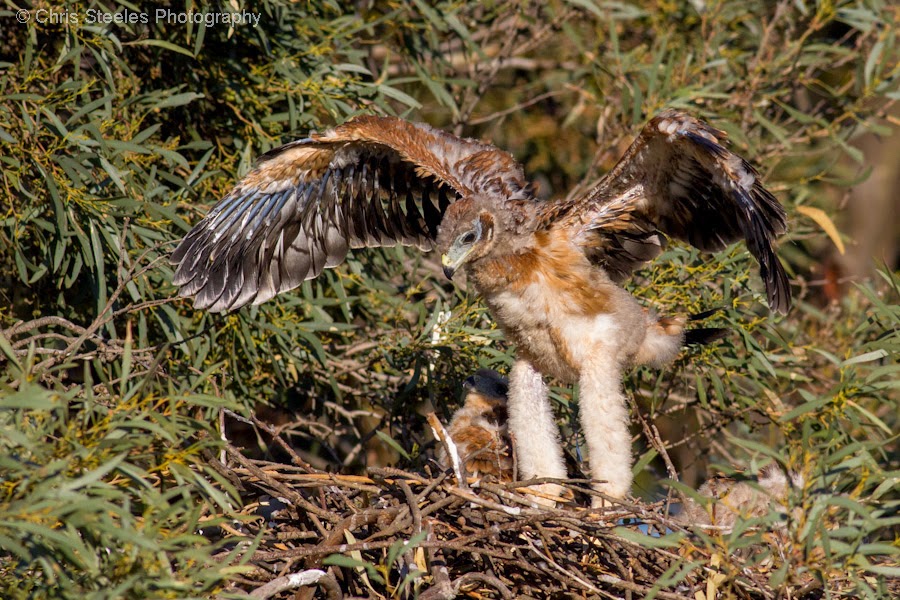 I messaged Lindsay and he came to relieve me from the hide! I was a little sore from being crouched for four and a half hours! But it was oh so worth it! I saw some stuff up close of which I had only ever dreamed about! Taken some cool images and some nice footage! But most of all spent some quality time with a most wonderful bird and it's little family! Something I will never forget!
Now a HUGE thankyou must go to Lindsay for letting me do this! Without his gear and expertise I would never have been able to do it! We had some great chats about all things raptors! and I hope to do a lot more stuff with him! David too for being the main reason this all happened! If he hadn't got in contact with me... I would never have had this chance! So thanks guys it is much appreciated! My mate Nigel too for finding the Harriers and organising access to the neighbours paddock!
I am just stoked to have been able to do this! It really was a dream come true..........

Posted by Chris Steeles at 6:41 AM