After two trips up the Strzelecki track in 2013 this year the Birdsville Track was calling...
This year Michael and I decided to do an earlier trip than usual and we were packing the Hilux on the evening of the 6th of June! Ready for an early departure the next morning!
The alarm went off at 4am and it was on the road in the dark... about 15 minutes later we came across our first bird of the trip a cute little Southern Boobook! Which was closely followed by a couple of Eastern Barn Owls. Light was on the Horizon as we were making our way along north of Clare and with a patchy fog around the area the birding was fairly slow... The next highlight bird didn't come until we were north of Orroroo in the mid north in a spot where some low hills rise off a plain. Back in September last year we had a Peregrine buzz us as we were cresting one of the hills! This time whilst crossing the plain, we mentioned that Peregrine as we neared the spot, this time no Peregrine showed on that hill... a slight disappointment.. which turned on it's head only a couple of km's further north where a beautiful big female Peregrine was sitting low on a dead branch right beside the road! We turned around after whizzing past to try for some shots but she must have flew whilst we were turning.. so it was not to be! Always a great bird to see though! and pretty cool to see it on our way up north again like last year... a good omen we thought!
Hawker was our first stop for refuelling and up to here other then the mentioned raptors the birding had been pretty slow... not that the weather had helped being fairly foggy! All this would change when a few km's north of Hawker we stopped at a great little spot we had found by accident one day and found all sorts of birds! This quite uninspiring looking spot has never failed to deliver some great birds every time we have stopped there! This time true to form we found quite a few different species in a 20 minute search including Horsfield's Bronze-cuckoo, White-fronted Chat, Redthroat, White-winged Fairy-wren, Zebra Finch, Australasian Pipit, Southern Whiteface and White-winged Triller!


Lunch was had at Leigh Creek as usual and then it was onto Lyndhurst before heading north towards Marree. There's a great little spot called Farina about 20 km's up the road from Lyndhurst we dropped in to have a look and found it pretty busy with it being a long weekend! We still managed our first Budgerigars and Spiny-cheeked Honeyeaters for the trip but with so many people around and plenty of km's to go... we didn't spend much time here. Would be a lovely place to camp in quieter times though! ﻿


One of the trip highlights was spotted by Mike as we were about two thirds of the way to Marree when out to our right he spotted a pair of Black-breasted Buzzards circling low about half a kilometre away over the plain! Unmistakeable with their big white windows in their wings and short tails... this was by far the furthest south we had ever seen them and it was nice to tick them off the trip list nice and early!
Another fuel stop at Marree and it was onto the track proper!
﻿
First major stop on the track was at Clayton wetlands on Clayton Station... this was the first of many bore drains to come! To be honest this spot was a little disappointing in regards to birdlife... we saw more bird species in the surrounding sand hills than we did at the water! So we didn't hang to long here and kept moving north up the track!
Evening loomed and we needed to find a camp.. with camping only allowed in designated areas along the track now we ended up staying at a great camping area set up on Dulkaninna Station right near another bore drain!
After a big day driving it was good to sit down with a beer beside the campfire as we watched the last rays of sunshine disappear below the horizon!
After a classically bright starry outback night... the type only seen when your hundreds of miles from the nearest man-made light! We awoke to the very cool sound of Brolgas calling from somewhere further down the wetland! A quick breakfast and pack-up ensured and it was off to find the Brolgas! We walked down the wetland for a while but found it fairly quiet at the end we were... so we decided to go back and drive to the other end. On our way back Mike spotted the Brolga's out in the dry country about 200m away from the water! We approached quietly and carefully as to not flush them but found them to be quite confiding so a decent photo session ensured!
﻿


We spent about 15 minutes with the Brolga before they decided our session with them was finished and so flew off to the other end of the wetland! On our way out we found an obliging pair of Wedgies sitting on an old power-pole...they also let us get out of the car and quite close before taking to the wing! So all up it was a good little start to the day!
﻿


The day had started well.. but then it took a turn for the worse! About 30km further up the track I looked for my binoculars... and they weren't there! So I thought back to where I had last seen them and remembered placing them on the car fridge on the back of the ute when we saw the Brolga's! We pulled over and as expected they were nowhere to be seen. So we turned back to try and find them... which we did but not until we were pretty much back where the Brolga's were! Luckily they had fallen off into soft dirt and were ok! Phew!! Plus on the way back to get them we got our first Gibberbird!! So the time lost to going back wasn't all lost!
﻿
Mungerannie was the next major stop to fuel up, have lunch and check out the waterhole! Apart from many Little Corellas and another pair of Brolga as well it was fairly quiet! This place has bucket loads of potential but it was the middle of the day and not much was happening... we decided to keep moving as even with five days for this trip... the days at this time of the year are short and we had to make the most of them!
﻿
All the way up the track so far we had been coming across waterholes and bore drains and in most of these there were invariably some ducks usually Grey Teals or Pink-eared but with an occasional Pacific Black of Hardhead. A Freckled Duck made a nice change at another bore north of Mungerannie!
﻿
Our next camp was at a camp area was called Tippipila, we found ourselves a nice sandy area to roll out the swags and set about getting a campfire going as the sun was setting. It looked quite plain.. but was a surprisingly birdy place! As we set camp we had a flock of about 30 Budgerigars wheeling around in their last flight for the day before going to roost, a pair of Blue Bonnets flew over us as well and flew into a Coolabah on the other side of the creek to roost for the night! (We saw them leave the next morning!) and to top the days birding off in a big way... when there was only a glimmer of light left in the evening sky a Spotted Nightjar did a couple of low passes over our campfire trying to catch moths! A bird I never tire of seeing! Very cool!
After a windy sand-blown night the morning started with more Budgie action and some White-breasted Woodswallows hawking above as well as we ate breakfast!
After packing up it was off again... first interesting sighting for the day was a big male Dingo in beautiful condition! Easily the best looking one I had seen! on the roadside. We stopped  to photograph him, he looked at us for a moment before slowly trotting off towards a distant creekline!
﻿
Our next find was a pair of Gibberbirds on the side of the track as we made our way into Pandiburra bore to try and see the Yellow Chats which reside there! This pair of Gibbers gave us a bit of a run around and liked to sit into the sun from where we were! We tried to get some good shots of them but it wasn't to be this time...
The bore really was a highlight and in here we got two juvenile Yellow Chats! Would of liked a bright male but it wasn't to be! This was a lifer for me and Mike so that was very cool! The list of birds unseen by me in SA is getting quite small! So it's always pretty special to find a new one!
﻿


This little oasis in the middle of nowhere also produced many other waterbirds such as Caspian Tern, White-necked Heron, Red-capped Plover, Straw-necked Ibis, Brolga, Black Swan, Black-winged Stilt and Swamp Harrier!
Dingos were also in abundance around this area feeding on the many carcasses lying about! Often joined by both Australian Ravens and Little Crows!
﻿

On our way out we also came across our first Inland Dotterel of the trip! He was a wary little dude and with a little heat haze coming off the gibber I didn't manage any decent images of it! Also not far from here we got an Eyrean Grasswren on top of a dune and from the same spot we came across a sight I would rather we didn't see which is what you can see below... Feral cats must do some serious damage to our wildlife and nowhere is this more in your face then in the outback! Where the cats are big and often seen resting in raptor nests!  ﻿
﻿ 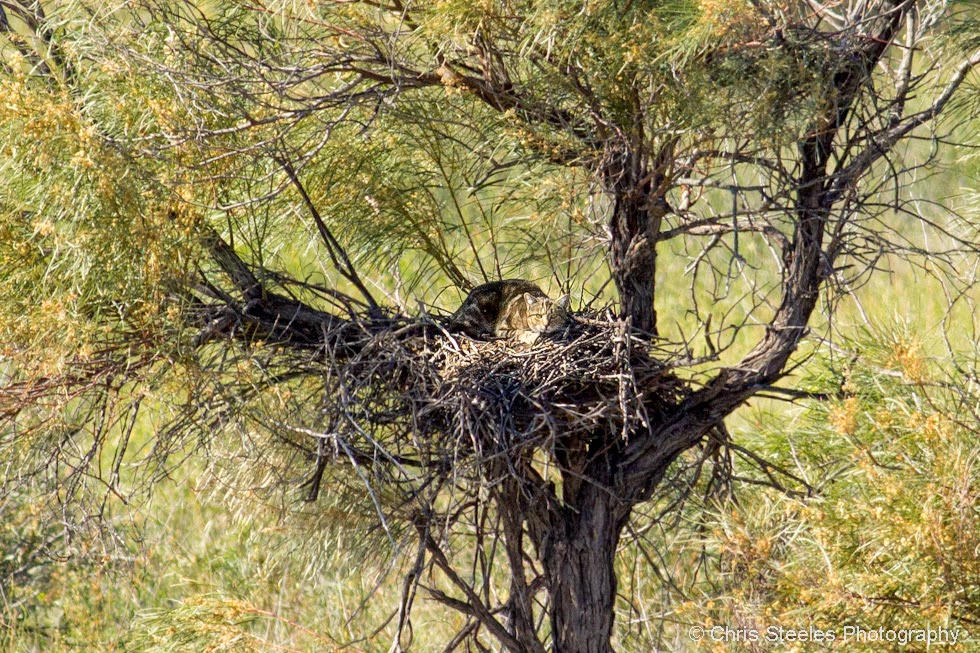 The rest of the day was spent driving up to Birdsville with many stops on the way whenever we spotted something from the car! The only new bird for the trip in this section was a small flock of Orange Chats. We tried a couple of spots for Banded Whiteface without luck and then rolled into Birdsville with about an hour of light left!
We set up on the banks of the Diamantina River and kicked back with a beer watching both a beautiful sunset and a lone White-necked Heron slowly stalking the muddy waters of the river below!
The next day would be a short trip north of Birdsville and then turn around and slowly head back south!
Stay tuned for 'Birdsville Track - Pt 2, southward bound...' coming soon :-)
Also I will write a full bird list from our whole trip at the bottom of part 2!
﻿
Posted by Chris Steeles at 5:41 AM