﻿
After our nice count of marsupials found with the spotlight our second day came to an end... I remember laying in my swag under an amazingly bright Milky Way... there was no moon.. but it was really bright! bright enough to throw shadows.... only when over a thousand kilometres away from the nearest capital city will that happen! or so it seemed at the time anyway!
We were up early the next morning to the sublime? sounds of an Australian Raven digging through our rubbish box before first light!! we tried to hustle this morning so we didn't waste any of the nice cool morning conditions... somehow we still only got out of camp by about 7.45am!
Oh well.. didn't matter after yesterdays superb birding we were amped for what this day would produce and we didn't have to wait long!
We made our way to the actual Strzelecki creek crossing, just as it came into sight.... we spotted a couple of Letter-wing Kite's sitting on-top of a tree sitting on the floodplain! Far-out! THAT'S how you start a mornings birding!
This is what I had been hoping for! LWK's in nice sweet morning light! At first we were careful so as not to spook them... but they quickly became accustomed to our presence and other than circling a few times to land back in the same group of trees... they pretty much just looked at us with a sort of bemused look on their faces! ﻿﻿ 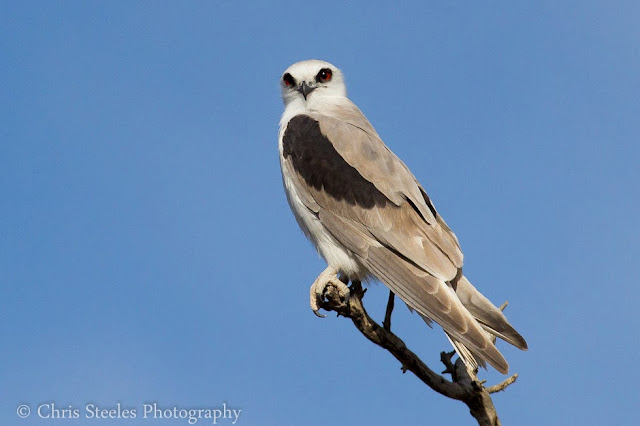 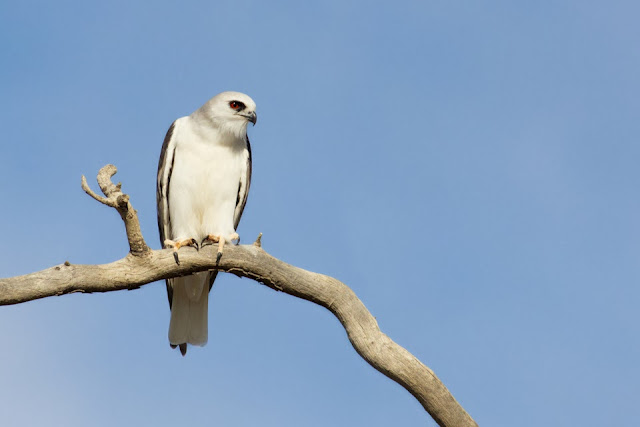 In the end we found five in this spot and spent about an hour with them, which allowed for plenty of photo opportunities! To be honest I would of loved to have stayed longer as they were completely ignoring us by the time we left... but we had to keep moving if we were going to get over into the Sturt National Park by sun-down! 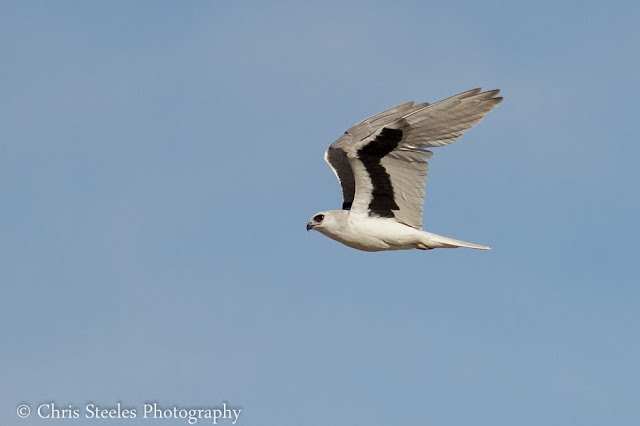 As is often the case... when there's one lot of good birds there's often another! As we got back into the car we spotted a pair of Wedge-tailed Eagles sitting low in a small tree on the other side of the road! Not sure how we hadn't seen them earlier! Blinkered by Letter-wings I guess! Anyway we managed to get on the right side of them for a few shots and found them to be quite confiding which was very cool!

So we left the crossing well happy with the start to the morning's birding! Next site we thought we would check out was a Banded Whiteface site about 13km's north of the crossing. When we got there we split off onto different sides of the road and went searching... some nice birds were seen including: Chirruping Wedgebill's and White-backed Swallows but no Whiteface. It was getting hot by now too.. so we decided it was time to put some kilometres under the wheels!
A little further up we turned right onto the track which runs from Merty Merty Station through to Cameron's Corner. Sandhill crossing time! for most of the drive up the track we had been running up in-between the sandhill's but now heading east we were going up and over them! Good for a change and a little more interesting too imo! As it was now the middle of the day we basically just kept driving through to the Bollards Lagoon site for Eyrean Grasswrens. We found the dune that everyone talks about with a stack of Canegrass up on top and went for a look. We had only been there maybe five minutes max when we heard an Eyrean call! Too easy! I played a little playback and it was instantly up on top of a bush! I tried for a few images (harsh light unfortunately) while Mike went off along the dune to search for more... No more were found but he did come across a small group of Cinnamon Quail-thrush! Always a nice pick-up!

After this nice encounter we got going again to try and find a nice shady spot for lunch... didn't go to far till we found some so we pulled out the camp chairs under the nice shade in the middle of nowhere and ate lunch whilst watching Black-faced Woodswallows hawking around us!

Cameron's corner was the next stop! The Hilux was getting thirsty and so were we! The Hilux's thirst was quenched first... and an expensive thirst it was! Then we went in and spent 20minutes holding up the bar having a nice cold beer and spinning a few yarns with the publican.... a nice little stop!
Through the gate and it was into Sturt National Park!
One of my target birds for this trip was to photograph the Black-breasted Buzzard.. I had seen them a few times before but didn't have any photos of them! I had hoped to have seen some already by this stage... but it wasn't until we pulled into the Fort Grey Campground that we saw our first.. an immature! But still great to see one! Lake Pineroo is only a five minute walk from the campground so we grabbed our camera's and headed off. As the lake came into view we looked up and saw more Buzzard's! A quick count revealed eight mostly immature Buzzards thermalling above us! Awesome! Only ever seen them in ones and twos! But 16 white windows floating around above!! Couldn't believe our luck! Then to top it off there were two perched in dead trees over the lake! 10 BBB's!! WOW!!!

This trip just kept getting better! Another target was also found at the lake. Australian Pratincole was a bird I had hoped to see on this trip and get an image if I could. After scanning the ducks and waterbirds on the lake we noticed a group of birds flying in fast and then landing on the edge of the lake not too far away... lifted the binoculars... Pratincoles! Fantastic! So I left Mike scanning the lake whilst I when into army crawl mode over near the AP's... Had an annoying Emu get in the way a few times! But came away with some nice images so I was pretty happy!

Just south of Fort Grey the road leads out of the park but turns east and hugs the boundary along the bottom! We pulled up at a creek crossing after Mike spotted a Woodswallow that looked different! White-breasted Woodswallow! One we don't see very often so I grabbed a few pics and then it was off again! 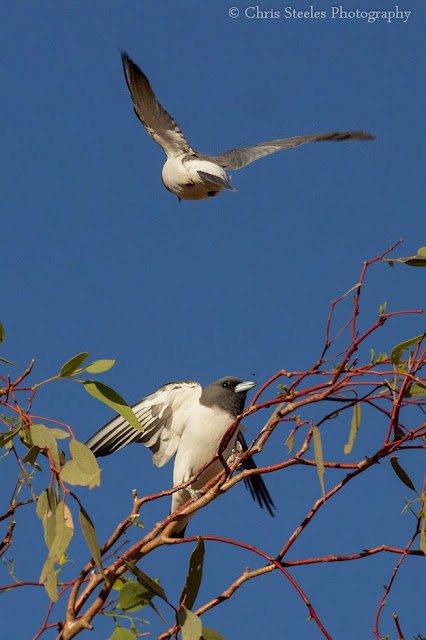 Driving along below the park we slowly moved out of the dune country and out onto some gibber plains. Gibberbird's were mentioned between us as something to look out for along this stretch... so I keenly searched the edges of the track! I spotted a little bird dart off not too long later so we pulled up to investigate... No Gibberbird... think it was a Pipit! But what we did find were Inland Dotterel's! Woohoo! A lifer for both of us and in late afternoon light I couldn't have asked for more! These were special little birds and I really enjoyed my time with them and I know Mike was pretty stoked on these too! If anything I only wish they weren't so wary... had a lot of trouble closing the gap! But not complaining! Just wonderful to see them!

After 20mins or so we left them to their peace in this amazing place and moved on in search of somewhere to camp. It was a fantastic 40 or so km's till we found a nice creek-line to camp in... the sun was behind us and real low on the horizon and the gibber plains were just a beautiful warm orange colour and it was a marvellous time to be where we were! Australian Pratincoles flying off the road in small groups here and there all the way through this stretch just topped off the day nicely! It was a highlight of the trip for me!
Just as the sun set we pulled into a lovely campsite with Kangaroos all around and settled in for the night! 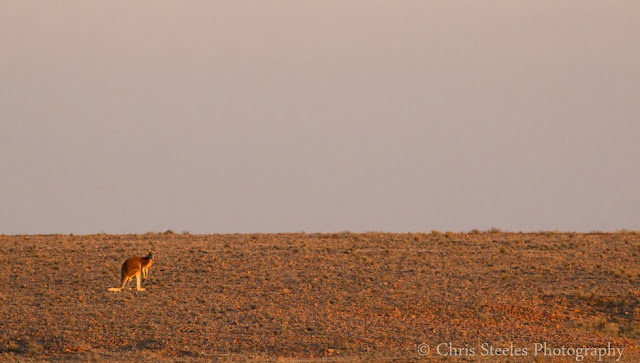 The next day dawned and we ate breakfast with the local Apostlebird family going about their business around us. Love this species no matter where I find them... so much character!
We did the last 20km's into Tibooburra pretty quickly and had a little stop there to make contact with our families! Took a drive out to an area of scrub near the airfield to look for Bourke's Parrots! The Bourke's were a no-go! But on the way back into town Mike spotted a big old Wedgie sleeping on a rock up on a small rise! O-yeah! This is the Wedgie shot I had been looking for! Now just to hope it stayed long enough to allow me some images! In the end this beautiful old girl was quite accepting of me as I slowly stalked my way up as close to her as I could get... In the end I closed the gap to about 10m! Easily the closest I have been to an adult wild Wedge-tailed Eagle! Double rapt! :-) 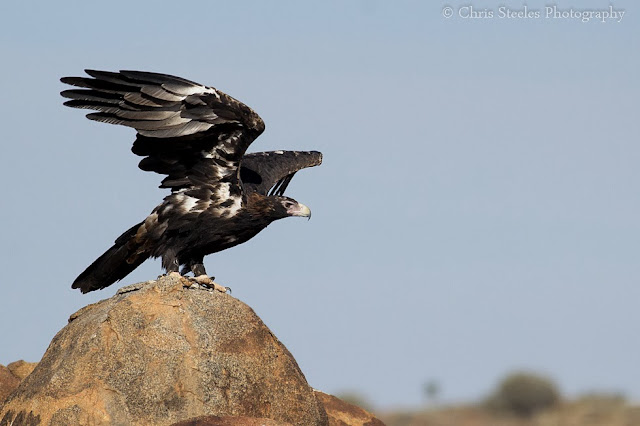 After this encounter it was onto the reality of the drive home! We had a lot of kilometres to do and it was time to move!
The drive down the Silver City Highway was fairly uneventful... highlights were another two Black-breasted Buzzards and a lot of waterbirds and a couple more Pratincoles on a big lake halfway down!
Lunch at Broken Hill broke the drive a little then it was back into SA and other then a small flock of Cockatiels somewhere near Hallett... the birding for this trip was fairly well done!
Pulled into my driveway at about 7.30pm that night spent.. but pumped on all the wonderful birds we had seen for the trip, the beautiful country we had been through and the great time had with a great mate who shares a passion for native birds and the outback!

Hope you enjoyed the ride too! :-)
Chris

Posted by Chris Steeles at 5:41 AM