In search of the Orange-bellied Parrot

Orange-bellied Parrots are one of the most endangered birds in the world it is estimated there's only around 50 birds left in the wild! Breeding in summer in the extremely wild south western corner of Tasmania then heading over to the south eastern corner of mainland Australia for the winter they stick to the coastal fringe trying to build up condition for the long journey back to the breeding grounds.
The OBP belongs to the Neophema parrots of which there are six, these are some of my favourite Aussie birds and one of my birding goals is to tick off all six. Before this time last year I had 'ticked' the Elegant Parrot, Blue-winged Parrot and Rock Parrot. I have had fleeting views of what I believe was a Turquoise Parrot in southern New South Wales, but not good enough to tick off the list, so that's for another time. The other two are much more of a challenge, the aforementioned OBP and another hard to find parrot of the arid interior the Scarlet-chested Parrot (also a work in progress).
﻿﻿This time last year I decided to join in and volunteer to go out and survey for Orange-bellied Parrots. This was a two pronged decision, one I am passionate about the survival of this great little parrot and two it's one of the Neophemas I was still looking for!
Surveys are held 3 times during the winter stay-over, and the first I did was held during May last year. Now searching for these birds really is like looking for a needle in a haystack, and I didn't hold out much hope. I organised with the coordinator Bob Green the patch I would search, I would be taking the boat and with a couple of birding friends (Kay Parkin & Ed Smith) we would be searching some of the islands of the Coorong at the mouth of the mighty Murray River.
Sometimes birding is just to easy and at the end of the trip I had found and poorly photographed one lonely OBP! Also in our sightings we found lots of Blue-wings, Elegants and a couple of Rock Parrots.
Only 7 OBP's were seen on this count with ours being one of them and one of only three found in South Australia.
Unfortunately I couldn't make the next survey then fell ill for the last one so that was the extent of my OBP surveying for 2010.
﻿﻿
﻿﻿Now in 2011 it's Orange-bellied Parrot time on the mainland again, with a good amount of enthusiasm I headed out again to the Islands to see if I could be lucky two years in a row!! With my brother Tim and good mate Nigel Humphrys we headed off on a beautifully calm Sunday and proceeded to search all the likely looking areas as beat we could. Now with law of averages the likelihood of us seeing another OBP was fairly low, but we optimistically clung to hope!
Alas it was not to be and we lucked out. Even the other parrot species with the exception of the Rock Parrots were missing this year! but that's birding, you win some you lose some.
Fortunately this area holds some other great bird life and below is just a few of the great birds seen.
I also got two lifers on this trip which is always very welcome with one of them being a group of 3 Beautiful Firetails (a bird I been hoping to see for a while) and a convoy of 5 Brown Quails. 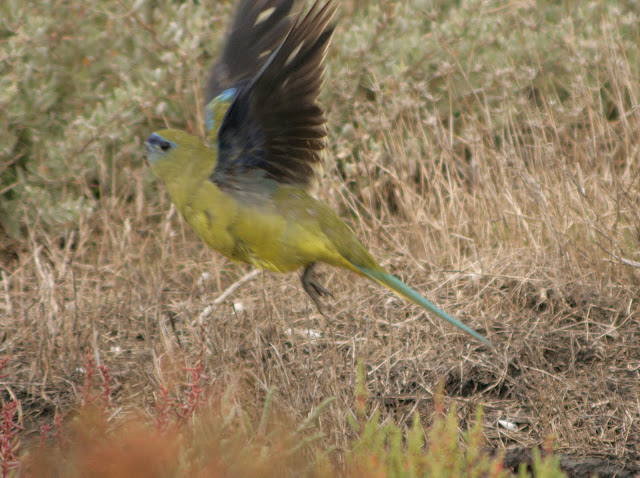 ﻿
﻿﻿
﻿ So two Neophemas left to find! Turquoise and Scarlets! The Turquoise shouldn't be too hard to get onto! (Famous last words!!) but the Scarlet-chested Parrot well that's another story and another Blog-post!

Chris
Posted by Chris Steeles at 6:51 AM