Spending a couple of hours or so out after dark with the spotlight is always an enjoyable experience. The tunnel vision created by the spotlight causes the countryside to be viewed in a different light (pardon the pun!). Also the creatures which can be found in the hours between dusk and dawn are also on the whole pretty cool to see, as usually they are only seen in fleeting glimpses shying away from our vehicles on the highway.
Last night I was keen to get my two oldest kids (3yrs&5yrs) out of square eye mode from watching the TV. So I took them out for an hours spotlighting. This is something they both love to do if Dad lets them stay up late enough! After an enjoyable hour or so and a few too many arguments over whose turn it was to hold the light! we ended up seeing one Tawny Frogmouth, a Galah and a Feral Cat! Unfortunately no Owls showed on this night, as we usually see one or two!
﻿ ﻿ Tawny Frogmouths in habit are not unlike our Kookaburra, apart for the laugh and beak shape they have many similarity's to the Kookaburra. During the hours of darkness Tawny Frogmouths, basically take over from where the similarly sized daytime hunting Kookaburra leaves! With both favouring hunting from perches for the same sorts of prey (mice, lizards, small snakes, spiders etc). Also when prey is taken all the work (tenderising!) is done with the beak, with both birds having relatively weak feet, only good for perching! 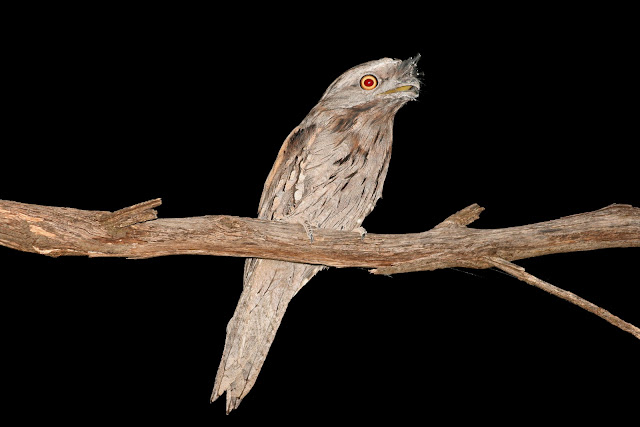 In the area I reside, just north of Adelaide South Australia, the Tawny Frogmouth is the most common bird of the night followed by Barn and then Boobook Owls. 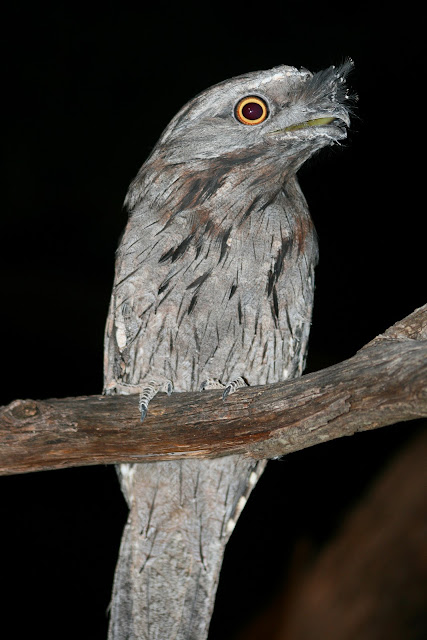 As you can see by the plumage they have amazing camouflage and during the day they often freeze in a position along a branch with their heads pointed skyward so as to look like a stump! Extremely effective at it they are too! It can be near impossible to spot them if you don't see them move or already know one is there. 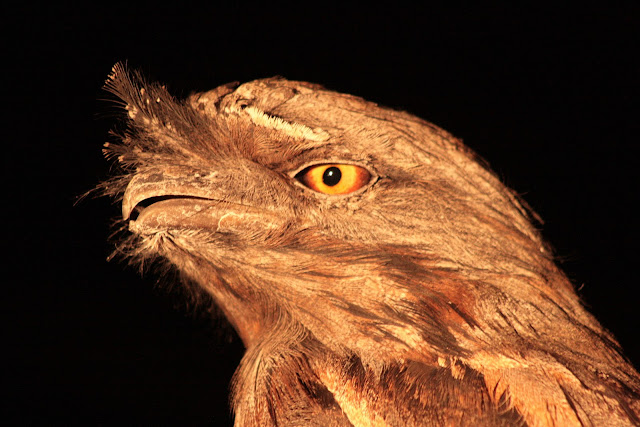 So if you are bored one evening or sick of watching the telly, grab yourself a spotlight and head out to a quiet backroad somewhere and see what you can find. It's always interesting with something to see!
Posted by Chris Steeles at 5:37 AM