Over the years I've been fairly lucky on my outback journeys with not too many tyre issues. On this trip as we neared 60kms to go to get to William Creek the horrid feeling of a very flat tyre was felt. A decent rock had busted through. I did an emergency repair on it but new it was pretty much stuffed so we limped up to William Creek to fit the spare casing I carry on the roof for just such an issue!
This unintended stop had us wondering whether we just stay in William Creek for the night as we didn't have enough daylight to make our intended camp. In the end with an hour and a half of daylight left we decided to just keep heading north and hope to find somewhere we could pull up for the night. 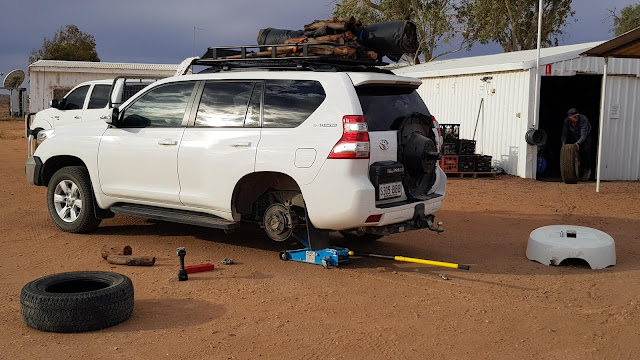 About 80kms up the track we found a large dam with an embankment where we could pull up for a little protection so we decided to camp here. It ended up being an amazing spot with loads of Bourke Parrots and Budgies coming in to drink both when we rolled up and also in the morning. To sit around the campfire with a stunning sunset fading and sound of Bourke Parrot wingbeats constantly flying past it was very enjoyable.
Day three would see us driving towards the Old Peake Telegraph station with the hope of finding Painted Finches. The drive was fairly quiet other than another tyre issue. This time one I could fix myself luckily.
Arriving at the turnoff we had 20kms of very corrugated track to negotiate. Last time I did this track 3yrs earlier it was rough... this time it was unbelievably rough! It was a slow journey and felt like every single thing in the Prado was being shaken apart! We were just living in hope that it would be all worthwhile in the end.
Eventually crossing through the gorge to look out on the main area where the old buildings and mound springs were, we set about searching some of the rocky hill faces and gorges in the area immediately before we got to where the buildings were. After a couple of unrewarded searches we drove on up to the end of the track at the buildings and had lunch. A little wander around the area after eating had us photographing some of the many numerous Bourke Parrots in the area.
Next we had around an hour to play with before we needed to leave to make Algebuckina Waterhole, which would be our campsite for the night. Yet again it was feeling like I would miss the said to be local Painted Finches in this spot. We decided on a couple of close spots to try as we made our way back out of the area. Pulling up near a soak near a steep rocky hill we searched the area then walked around a gorge with no luck. On the way back Lisa and I split up a little... I was almost back to the car near the soak so I thought one last try with some playback. At first I heard nothing... resigning to defeat again I shut off the playback and walked for the car. I'd taken not two steps when up high over head I heard a response! A single Painted Finch flew straight over and landed about 50m away! Woohoo!! At last a bird I'd wanted to see in the wild in SA for so long! I yelled out to Lisa but she was already on her way having heard the bird responding as it flew over from the direction she was. We set up in a good spot together and sent out another burst. Immediately the bird flew in and landed about four metres away! It was amazingly tame and spent the next twenty minutes with us just hopping around and feeding until it eventually flew a few hundred metres off. We tried to follow but didn't see where it landed. After about 15mins searching we gave up and walked back to the car. To our surprise there were another two Painted Finches sitting on the rocks above the soak! We tried to close the gap but this pair flew off over the hill not to be seen again. A lifer for both of us... this in itself made the trip a success! The road out didn't feel anywhere near as rough as on the way in ....being on a lifer high! Ok... maybe it did! It's bloody rough!

As we neared the main Oodnadatta track we found our first Cinnamon Quail-thrush for the trip. A bird which had been conspicuous by it's absence as they're generally pretty common on the outback SA tracks. We stopped for this pair and got a few shots of them as well.

We arrived at Algebuckina Waterhole in perfect time to set up camp and then kick back and watch the sunset after an amazing day of travelling and birding. More Bourke Parrots, Budgies, raptors and plenty of waterbirds were seen here both in the evening and again the next morning. It really is a lovely spot (although quite popular) to spend some time.
Leaving the next morning a pair of Cinnamon Quail-thrush were the first interesting bird of the journey north to Oodnadatta. This pair were seen as we rose up the escarpment out of the Algebuckina waterhole area. The only other highlight along the way to Oodnadatta was a creek-line with plenty of trees along it and a leaking pipe near a windmill in among it. This water source had a small flock of Australian Ringnecks (Pt Lincoln form) and a pair of Cockatiels hanging around... with both being a first for the trip.
A coffee break was had at Oodnadatta before heading south for the first time. The long stretch from Oodnadatta to Coober Pedy produced many good birds from Gibberbirds at a few places, Rufous Whistlers and Red-capped Robins in the creek line we stopped for lunch in, and even a very vocal Rufous Fieldwren as we neared Coober Pedy.
Fueling up at Coober Pedy, we headed to the William Hutchinson Memorial area to set up camp and chase another bird I hadn't seen for a long time and one Lisa hadn't ever seen. The Chestnut-breasted Whiteface is sweet little bird that lives in very isolated little populations. The memorial area is a known haunt and one I'd searched before with no luck.
Camp was set and then with around two hours of light left, we headed off north of camp to see what we could find. After walking about 100m Lisa said she could see a mixed flock of little birds in the distance about 150m away. We could make out Black-faced Woodswallows but everything else looked small and too hard to identify. So we slowly made our way over... stopping about 30m away I lifted my binoculars and the first bird I saw was a Chestnut-breasted Whiteface... Too easy! We stalked them and got a few shots before they flew a little east. We followed for a while but as the light had faded we headed back to camp. Satisfied in another quite successful day, we retired to the campfire and relived some of the cool encounters we'd had over the last four days. With a big day of driving ahead, we hit the swag relatively early hoping for another good session with the Whitefaces first thing in the morning.


Rising early the next morning we headed to where we'd last seen the Whitefaces and relocated them within about 15 minutes. This time it was a flock of about eight birds including a juvenile. Whilst they're not the wariest bird they also don't stop moving often, so getting good shots was a challenge, but I think we did okay by the time we headed back to the car.

On the way home we tried another spot where Whitefaces are often seen but we found none... the best bird on the trip home would've been a Crested Bellbird at our lunch stop just north of Pt Augusta.
In the end it was a great trip with great birds despite the issues with weather... tyres and CENTIPEDES! 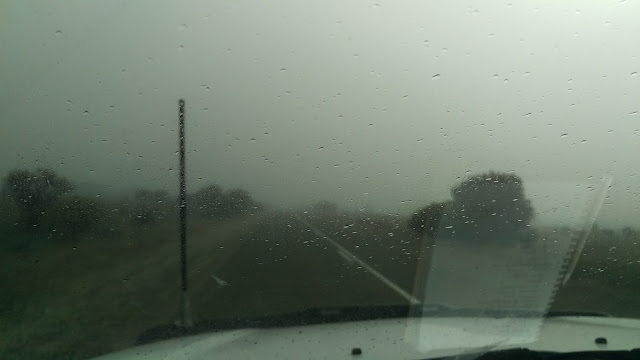 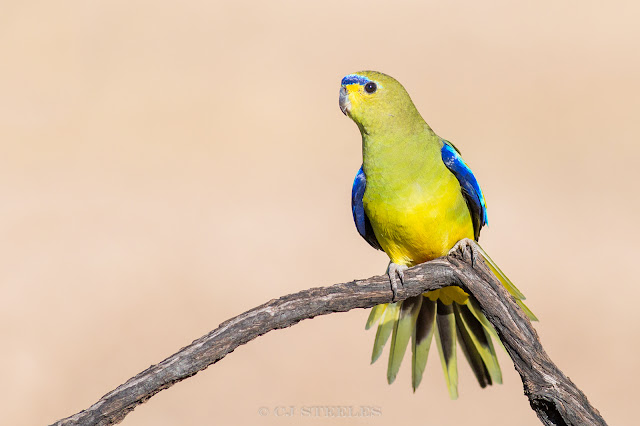 Of Potato weed and Elegant Parrots....

Chris Steeles
Lifelong bird enthusiast, photographer, paraglider pilot and fisherman who loves nothing better than to be hiking somewhere in the great outdoors! Followed by painting some of what I find when I get home!!